Novec 649TM is a relatively recently invented fluid, brought forward by the company 3M. The chemical formula is C6F12O and the chemical name dodecafluoromethylpentanone. This Novec molecule belongs to the so-called fluoroketones family, a family of chemical compounds consisting of a fluorinated carbon backbone and a double bonded oxygen atom (carbonyl group). Figure 1 shows a 3D model image of the molecule, in which the green dots represent the fluorine atoms and the red dot the double bonded oxygen atom.

Novec 649TM is a clear, colorless and low odor fluid. It has a low toxicity, high thermal stability and a low flammability and is an effective heat transfer fluid with a normal boiling point of 49 °C. When fluoroketones are dissolved in liquid water, they usually hydrolyze and form an organic acid, but they are very stable in the absence of water. In contrast with greenhouse gases like perfluorocarbons and hydrofluorocarbons, Novec 649TM has a very low global warming potential (GWP = 1) and a short atmospheric life time of about 5 days. For instance, the hydrofluorocarbon HFC-134a (C2H2F4), frequently used as, amongst others, refrigerant in automotive air conditioning systems, has a GWP of 1300 and an atmospheric life of about 140 years. 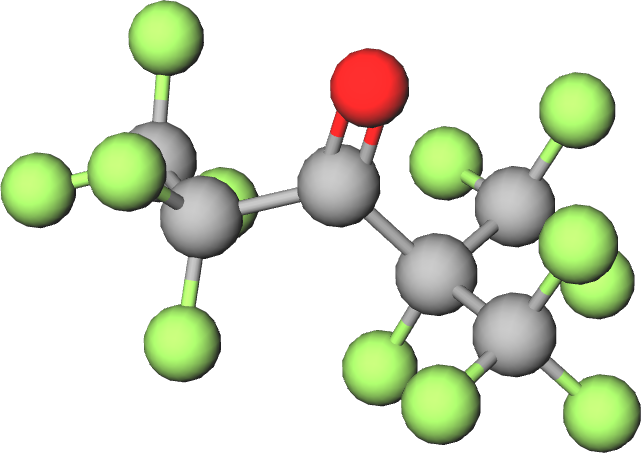 Other examples are the hydrofluorocarbon refrigerant R245fa (C3H3F5), inter alia used as a working fluid in organic Rankine cycles (ORC) systems, with a GWP of 1030 and an atmospheric lifetime of 7.6 years and world’s strongest greenhouse gas sulphur hexafluoride (SF6) with a GWP of 32000 and a life time of 3200 years. In addition to other new fluids in general and refrigerants in particular (like the hydrofluoroolefins R1234yf, R1336mzz-Z, etc.), Novec 649TM has been developed as a greenhouse-friendly alternative to these substances. Novec 649 TM can be used, for example, as a working fluid in ORC systems, fire protection fluid, electronics cooling and as computer/data center cooling.

Novec 649TM is available in the Extended Fluid Set Add-on of FluidProp, our software for the calculation of thermophysical properties of fluids and can be used with the (free)StanMix, PCP-SAFT, and REFPROP libraries (REFPROP is a product of NIST, the National Institute of Standards and Technology, part of the U.S. Department of Commerce, but also available as add-on for FluidProp). Cycle-Tempo, our steady state flow sheeting software for the thermodynamic analysis and optimization of energy conversion systems, in turn, connects to FluidProp. As a result, the fluid is also available in Cycle-Tempo to, for example, design and analyze ORC systems. Figure 2 and figure 3 present a process scheme of such an ORC system made with Cycle-Tempo and a temperature-entropy diagram of the process, created with Microsoft Excel and data imported from Cycle-Tempo. For more information about the system, see the news item of June, 2022, a model example of an ORC system. Both systems are similar, except that in this example  a lower turbine inlet temperature and pressure has been chosen (160 °C and 15 bar, respectively), because the critical temperature and pressure of Novec 649TM are less than that of pentane, applied in the previous example. 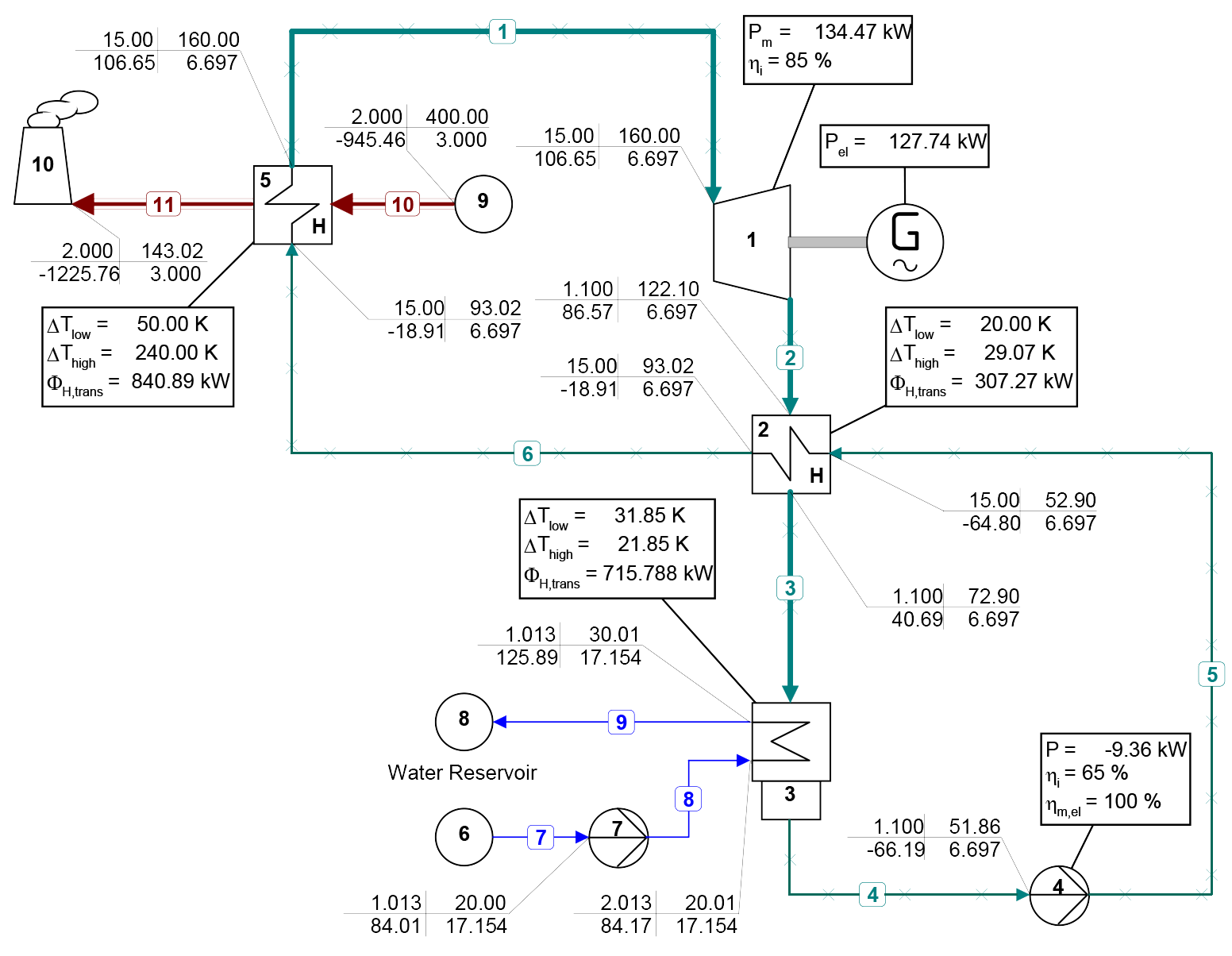 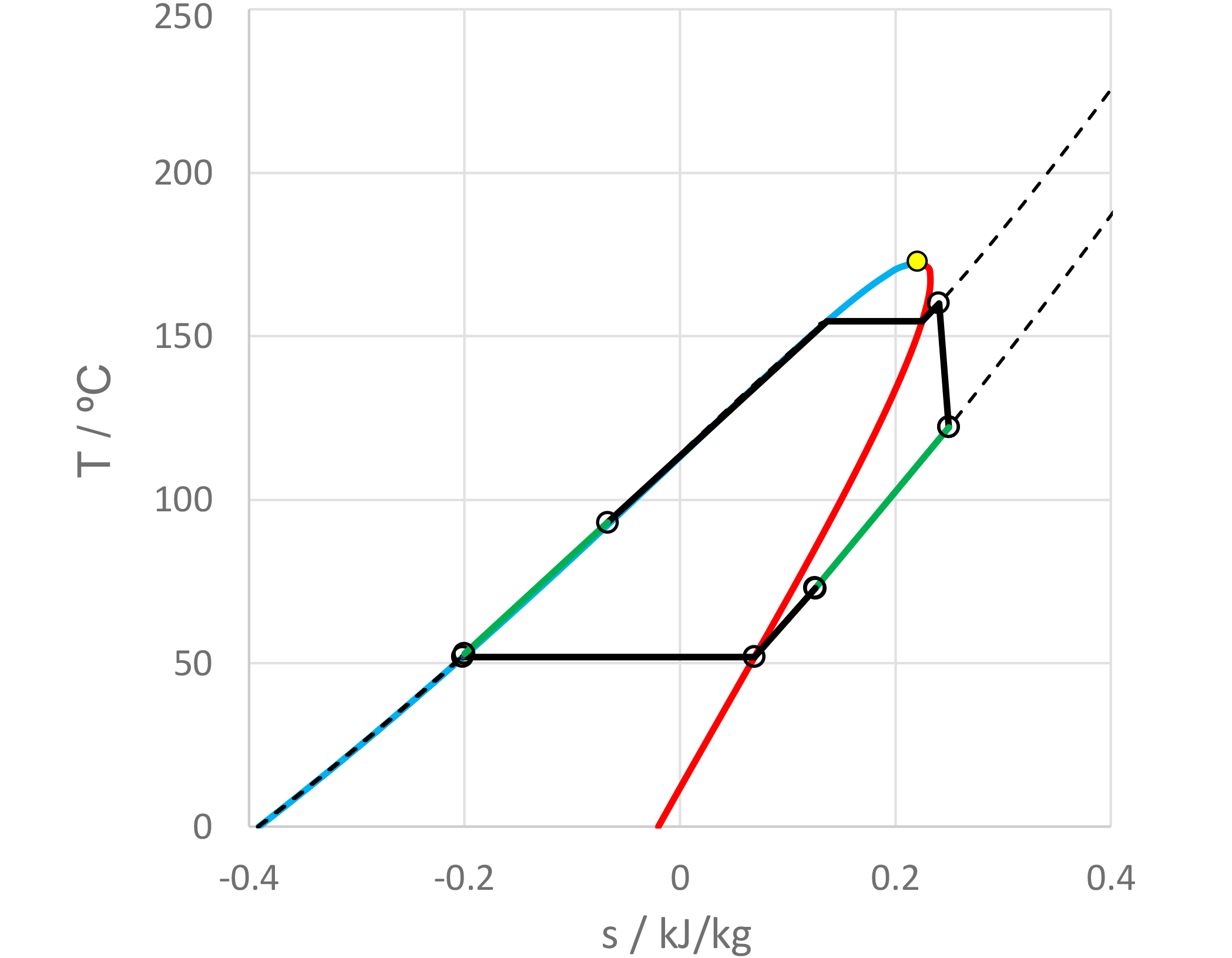 Figure 3: Thermodynamic process of the system presented in figure 2 in a T-s diagram.

A scientific paper and letter of correspondence have recently been published by Georgios Kasapis, et al. 1) and Shangze Yang, et al. 2) from the University of Edinburgh. In the paper, the PCP-SAFT equation of state of our FluidProp software is used to perform the calculations of the thermodynamic properties of state of mixtures of Novec 649TM and nitrogen. The PCP-SAFT equation of state is based on statistical mechanics. As a consequence, it incorporates information at molecular level, thus reducing the need for ﬂuid measurement data (which hardly exists for mixtures of Novec 649TM and nitrogen) for the development an accurate fluid model. Because of the strong physical background, it is robust, consistent, and predictive when calculating vapor–liquid equilibria and single-phase properties of complex ﬂuids and of mixtures in general.

The paper of Kasapis, et al.1) describes laser imaging experiments on laminar jets to observe the interface between an injected liquid and the surrounding gas under subcritical, transcritical and supercritical conditions. To do this, a stream of the fluoroketone Novec 649TM is injected into a chamber with nitrogen under high pressure and temperature and is examined as it evolves with the flow time. To define test cases for the entire range from subcritical to supercritical states, vapor-liquid equilibrium calculations were performed using the PCP-SAFT equation of state in FluidProp to identify the critical locus for mixtures of nitrogen and Novec 649TM. Planar laser-induced fluorescence and planar elastic light scattering imaging were applied to the jets to simultaneously image the mixing fraction with interface strength detection. The article presents and discusses evidence for interface evolution and supercritical states.

The image of figure 4 presents a P-xy chart of the Novec 649TM/nitrogen mixture for isotherms T = 360, 390, and 420 K calculated with PCP-SAFT. The results may slightly differ from the paper, because in the paper for Novec 649TM molecular parameters were applied that were published by Linnemann and Vrabec3), which were obtained by fitting to a only a subset of experimental data that were used to fit the molecular parameters in the present version of FluidProp. Note that for T = 390 K, close to the critical point, PCP-SAFT was not able to compute all the points of the curve because of convergence difficulties in this area. Figure 5 shows the phase envelope of a Novec 649TM/nitrogen mixture with 70 mole-% Novec 649TM. It is remarkable that for this mixture the cricondenbar (» 76 bar) is much larger than the critical pressure (» 46 bar). 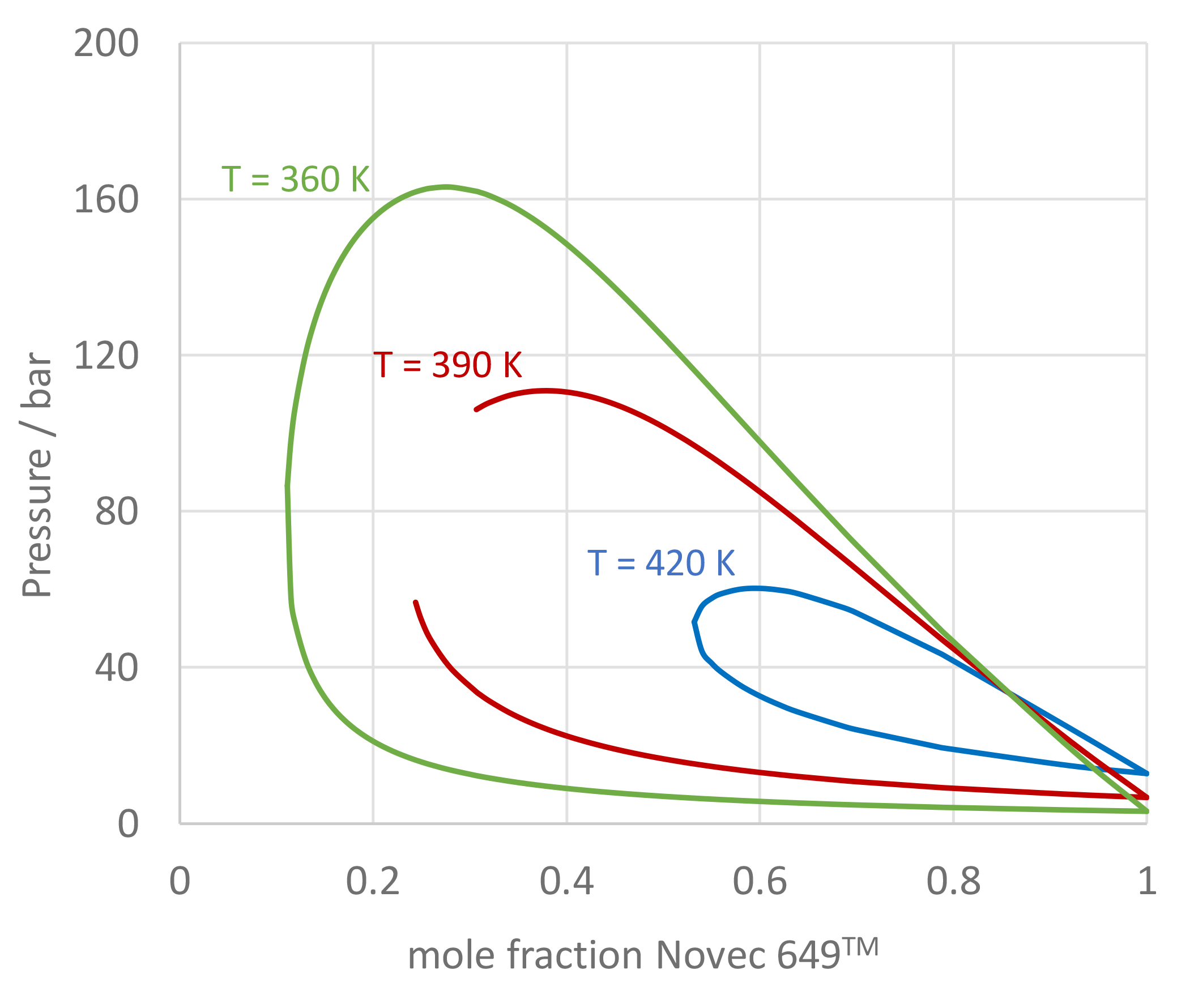 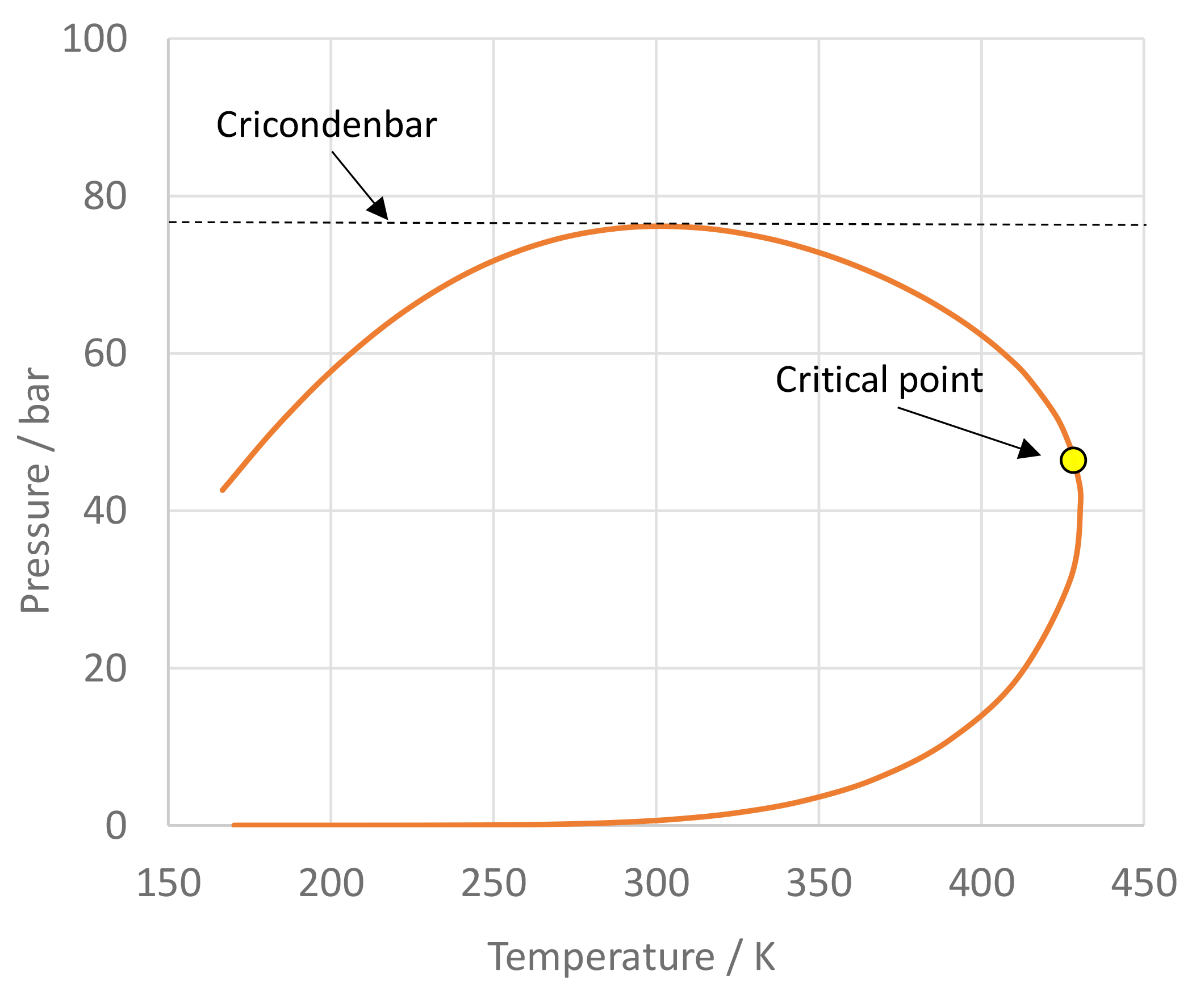 In the letter of correspondence of Yang, et al.2), evidence is evaluated for interface scattering that can occur even when the interface is assumed to have broken down in a supercritical jet. To evaluate this phenomenon, estimates are reported of the optical reflectivity for a diffuse, transcritical interface, including various liquids of current interest. Reliance is placed on prior work to explain the phenomenon and to estimate how strong it is for the cases of interest to the community. NIST REFPROP and the PCP-SAFT equation of state in our FluidProp software were used to calculate densities of various mixtures: dodecane/nitrogen, acetone/nitrogen, hexane/nitrogen, pentane/nitrogen, and fluoroketone/nitrogen.