Back to the FluidProp main page>>

With more than 1.000 download of the free version per year, FluidProp is probably one of the most popular software packages for thermodynamic calculations.

A uniform way to access thermodynamic properties in various models

FluidProp is more than just a fluid property library: it is a common interface to various state-of-the-art thermodynamic and transport property models: independently of the model implementation, the user needs to know one single logical syntax to call the function for the desired property or set of properties. By changing just a single function argument, you can switch from, e.g., the ideal gas model to a cubic equation of state model and appreciate if there is difference in the results (real-gas behavior).

Accurate and reliable for all conditions

Originating from the energy engineering sector, FluidProp provides fluid models that are accurate over a wide range of temperatures and pressures, thus for many oil&gas and chemical processes. It usually outperforms any other fluid-property code when it comes to speed of execution thanks to its advanced algorithms.

FluidProp is easy to use. It is accessible as a plug-in from Excel and OpenOffice Calc. It is available under macOS, Linux and Windows (both 32 bits and 64 bits) and through its COM interface, it is easily accessed from common tools such as Matlab/Simulink, Maple, Modelica and most common programming languages (Fortran, C, C++). In addition, a CAPE-OPEN interface is available for ease of use in the process industry.

A thermodynamic model for each situation

RefProp is the thermodynamic property library from the National Institute of Standards and Technologies in the USA.

Mixture properties can also be calculated using a generalized model described in the RefProp documentation. Mixtures can be composed from the list of available pure fluids. RefProp contains an advanced mixture model for natural gas components, namely the GERG-2008 model.

You can use your copy of RefProp if you already bought it from NIST and more easily couple it to your program through the FluidProp interface. Alternatively, you can buy RefProp at the same price from Asimptote as part of the FluidProp package

FreeStanMix implements the PRSV cubic equation of state, which is one of the most accurate cubic equations of state to predict the properties of non-ideal fluids. In particular provides accurate estimations of saturation properties up to the vicinity of the critical point.  It is particularly useful in case fluid data for RefProp are not available, as it requires only few parameters to model a fluid. These can also be estimated by Asimptote upon request, if they are not available in the database. In addition, being a simpler model than the ones implemented in RefProp, it is faster, thus the model of choice when computational time is more important than extreme accuracy. An advanced version of FreeStanMix, which is more accurate and reliable, is available in the StanMix add-on (see below).

StanMix implements the iPRSV equation of state, a recent improvement of the PRSV equation of state that solves the artificial discontinuity in the calculation of properties in the standard PSRV equation of state. Accuracy has also been slightly improved. This feature is relevant to some scientific and industrial applications. Further advantages of StanMix  over FreeStanMix include:

For mixtures, StanMix uses the Wong and Sandler mixing rules which are suitable for the modeling of highly non-ideal mixtures, and are thermodynamically consistent.

One of the nice features of the StanMix model is that we can easily add extra fluids to those that are already supplied.  So, even if your particular fluid is not yet avialble, it will not cost you much to get it into the library.

PCP-SAFT implements the Perturbed Chain Polar SAFT equation of state (an improved version of the PC-SAFT equation of state), which is based on molecular models and is known for its ability to predict vapor/gas-liquid equilibria of complex fluids (e.g., macromolecules, copolymer systems, etc.) and fluid mixtures for a broad range of conditions (including, e.g., strongly polar systems and ionic-liquid + CO2 systems). Due to its theoretical nature, it is robust, consistent, predictive when applied to mixtures and reliable for extrapolations over the regions where the parameters were fitted.

The researchers behind FluidProp continually improve the software to meet the challenges of the research that is being done in their institutes. This means that by using FluidProp, you get access to the most up-to-date insights in thermodynamic modeling.

Even though it is largely developed in research institutes, FluidProp does not have the relatively poor quality that is so often the hallmark of academic software. The researchers readily acknowledge that industry can only work with their software if it is reliable and stable. Therefore, the company Asimptote was formed to intermediate between the researchers and the industry. Asimptote guards the stability of the code and offers support for its industrial users. 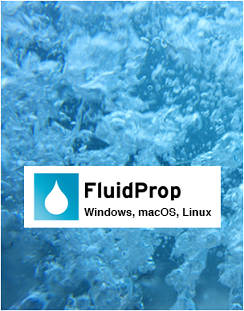